I use a medium Berkley lightning or med Hvy paired up with a Abu 5500 but you are looking at a hundred and a half for that. Plus side is I use it for bass too.

For a cheap setup it is hard to beat the King Cat combo that Cabelas offers. I bought one and it has held up well. Can be had in a number of weights lengths and configurations. Think I paid 40 for the combo and it came with their salt striker spinning real. I also noticed Zebco and Berkley has rods available. Check out what team Catfish has to offer too.
"Fish On!"
Top

7ft Med hvy to hvy Ugly stick ( $30-$45 ) and a Used Abu Garcia made in Sweden Round Reel. I suggest the 5000 - 6500 size preferably with a clicker. As far as getting a used reel goes I like pawn shops ; never truly know what there going to have in stock, plus you can look over the reel before negotiating on price ( I wouldn't pay over $65 for something even in excellent condition ).
Top

I've been using 3 white Berkley 7' Big Game rods with medium action for the last 3 years. They're equipped with Bass Pro Shops CatMaxx open face reels and 20 lb Berkley Big Cat line. Poles are $20 and reels are $50. No issues yet, but haven't caught anything big enough to have me update a thing. Have reeled in 2- 20+ pounders.
Top

I've got an older buddy who is essentially a fishing gear hoarder. He has bins FULL of good condition Abu reels (C3's/C4's and variants) in his garage. He sells most of them to me for $30-$40 and I've outfitted myself and all my other friends with gear from him. He's got a lot of 4600's and 5000/5500's, but is kind of limited on 6000/6500's.
If anyone needs a TinBoats.net hookup, let me know! I'll start a thread in the FS section tonight and post some pictures.

Thanks to Butthead I got 2 used Abu 5500 C3's. One is a slightly older model than the other, but they are both very nice. Can't believe how smooth they cast!! I got the hang of them pretty quickly and can chuck a 1oz. weight seemingly a mile. I had an Abu Garcia Conolon 6' medium rod in my shed that had an old low profile baitcaster on it that I never really got the hang of and ended up breaking the reel years ago. I threw the 5500 on that rod. Seems to be an OK combo.

BigTerp wrote: Any suggestions on a reasonably priced bait caster? Like I said, won't be getting anything to big on the other end. Maybe the very occasional 10-15+ lber.

And don't sell yourself short!

You will catch a record fish!

And Jim was right. Wasn't really a record, but caught my PB channel catfish the first time I went out with my new 5500. 10# 6oz, 29". Caught it on a sunfish head. Rod and reel performed fantastic. Was set on getting a new rod to go with my reel, but after catching this one I don't really see the need. 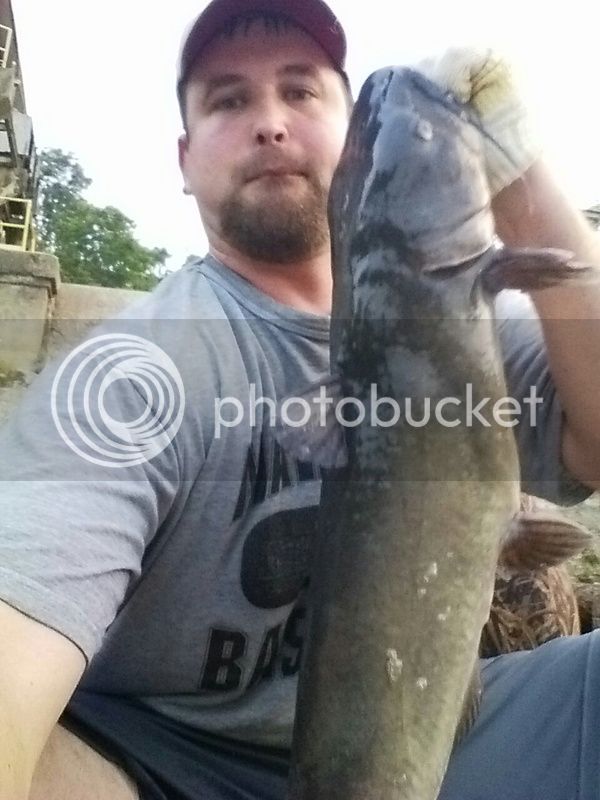 I hit the wrong key on my tablet. Penn 210 reel 25 to 35.00 on ebay paired with quantum big cat rods. I am mostly fishing for blues and flathead though. Quantum big cat rods are hard to find now. I think I paid 50 or 60 apiece for them. If you like garcias try a 6500. Have a look at tangling with catfish rods.