I don't try to go out of my way to bad mouth products, pretty much ever to this point, but I attempted to clean up a pair of Quantum Smoke reels tonight that disappointed me so much I thought I was doing others a disservice by not sharing what I found.

These reels originally retailed for $200 and offered such selling points as full aluminum frame and side plates, machined aluminum spool, aluminum main drive gears and however many bearings they cram into these things, 12 if I'm not mistaken. The exact count is irrelevant, as these things are nothing more than paper weights after no more than one season's worth of use.

I will start by saying I have an older Quantum Energy PT that has served me faithfully for 9 years now, receiving a thorough cleaning and re- lubrication during each off season. It was with that reel in mind that I thought these would be excellent. I couldn't have been more wrong.

Lets start with the exterior, as that's what everyone sees first: 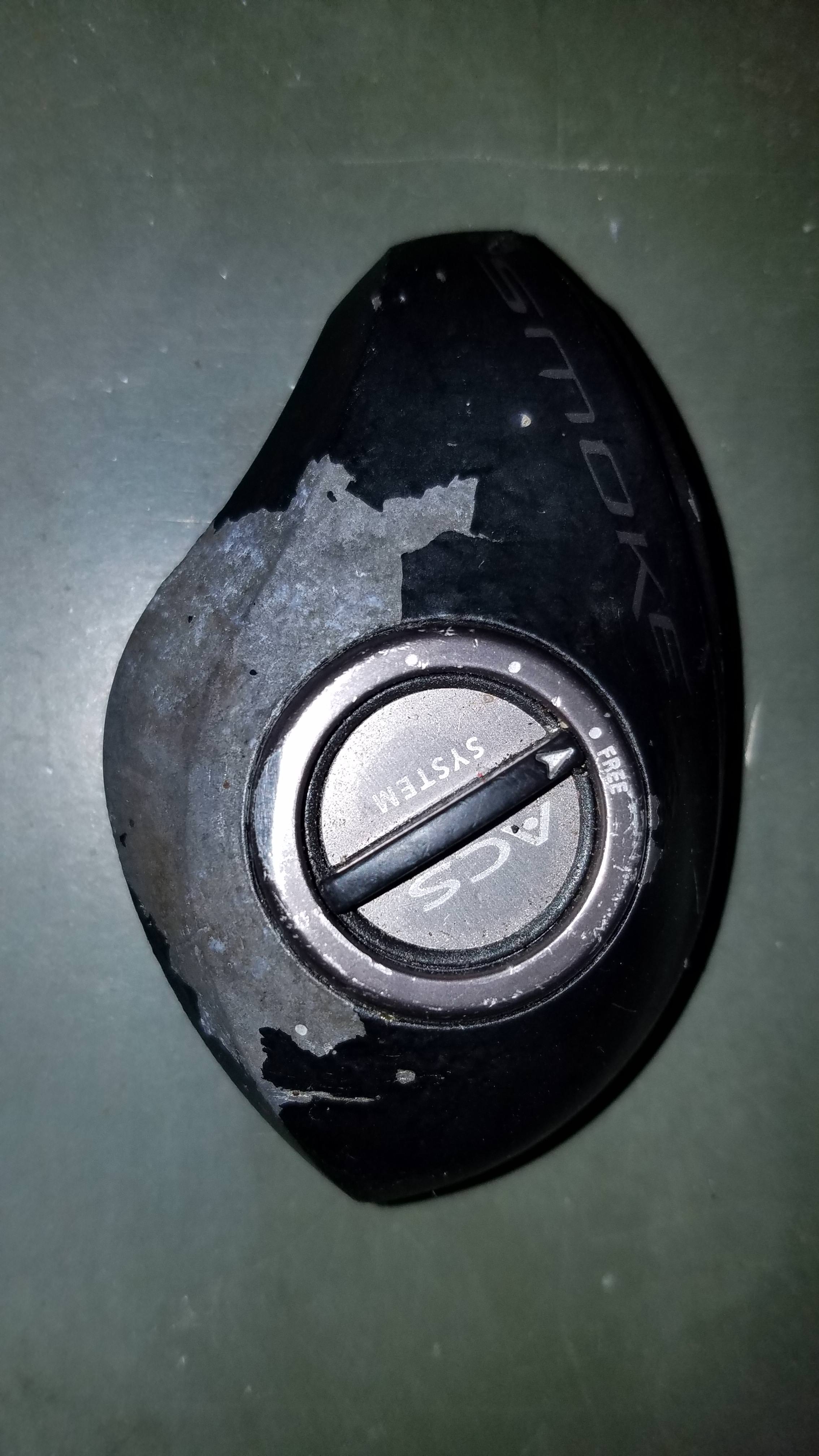 Some serious finish quality issues going on after so short a period of ownership.

Perhaps that was something unique to this reel, the other one isn't missing huge swaths of finish, so were that the extent of the problems I could let it go. But we're just getting started. The reel presented with very rough winding and especially rough casting characteristics. Upon inspection the spool bearings were in frightful condition, so I recommended replacement of all three...ABEC 7 orange seal bearings in place helped considerably with the casting, but the retrieval was still rough.

Pulled the reel apart and was aghast at what I found inside. For starters, it was filthier than reels I'd seen which were used by tournament guys and worked to the bone. A quick look over the reel and we see design flaw #1...hole in the lubrication port cover. 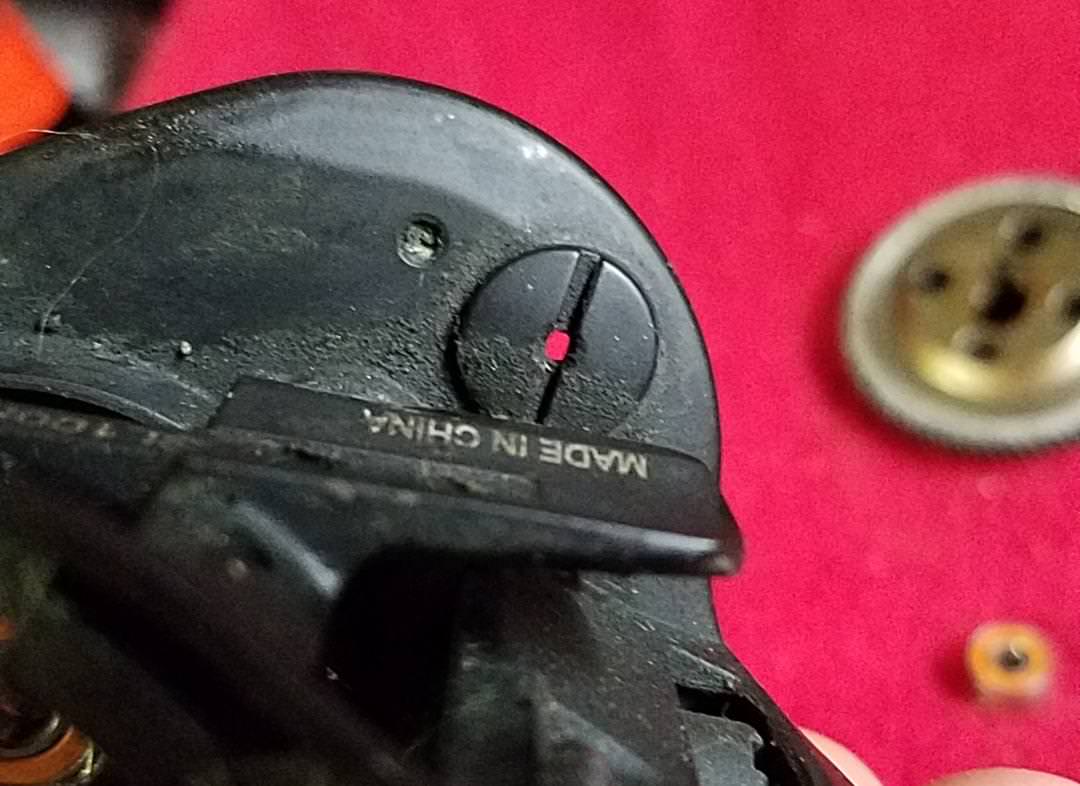 Upon further inspection there was corrosion evident on the main drive gear, and many of the gear teeth had been worn down, likely the cause of the rough retrieval. 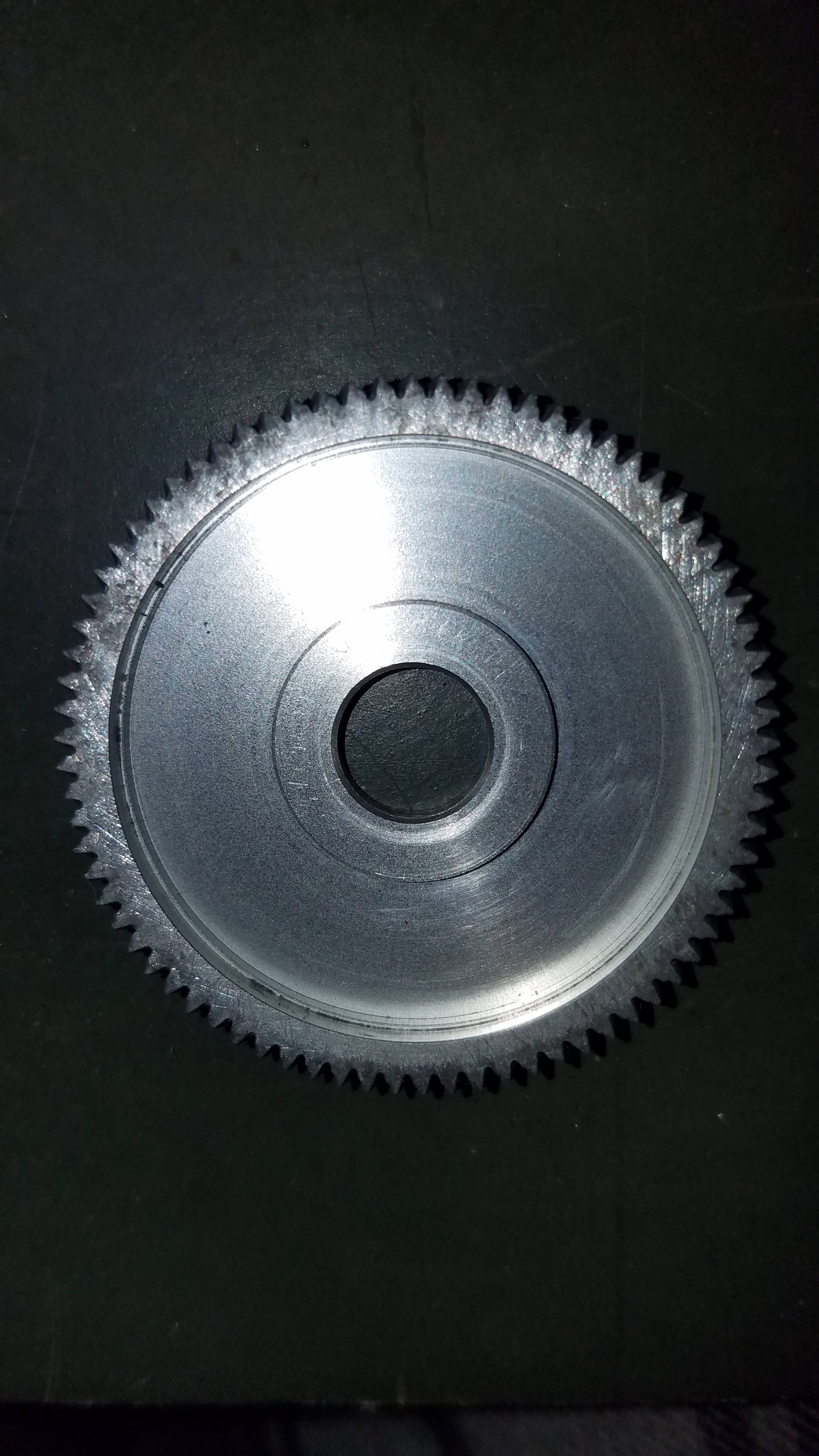 Looking closer still we see damage to the teeth themselves. This was surprising given the fact that the brass pinion gear wasn't worn at all. They clearly used an inferior grade of aluminum for this gear. 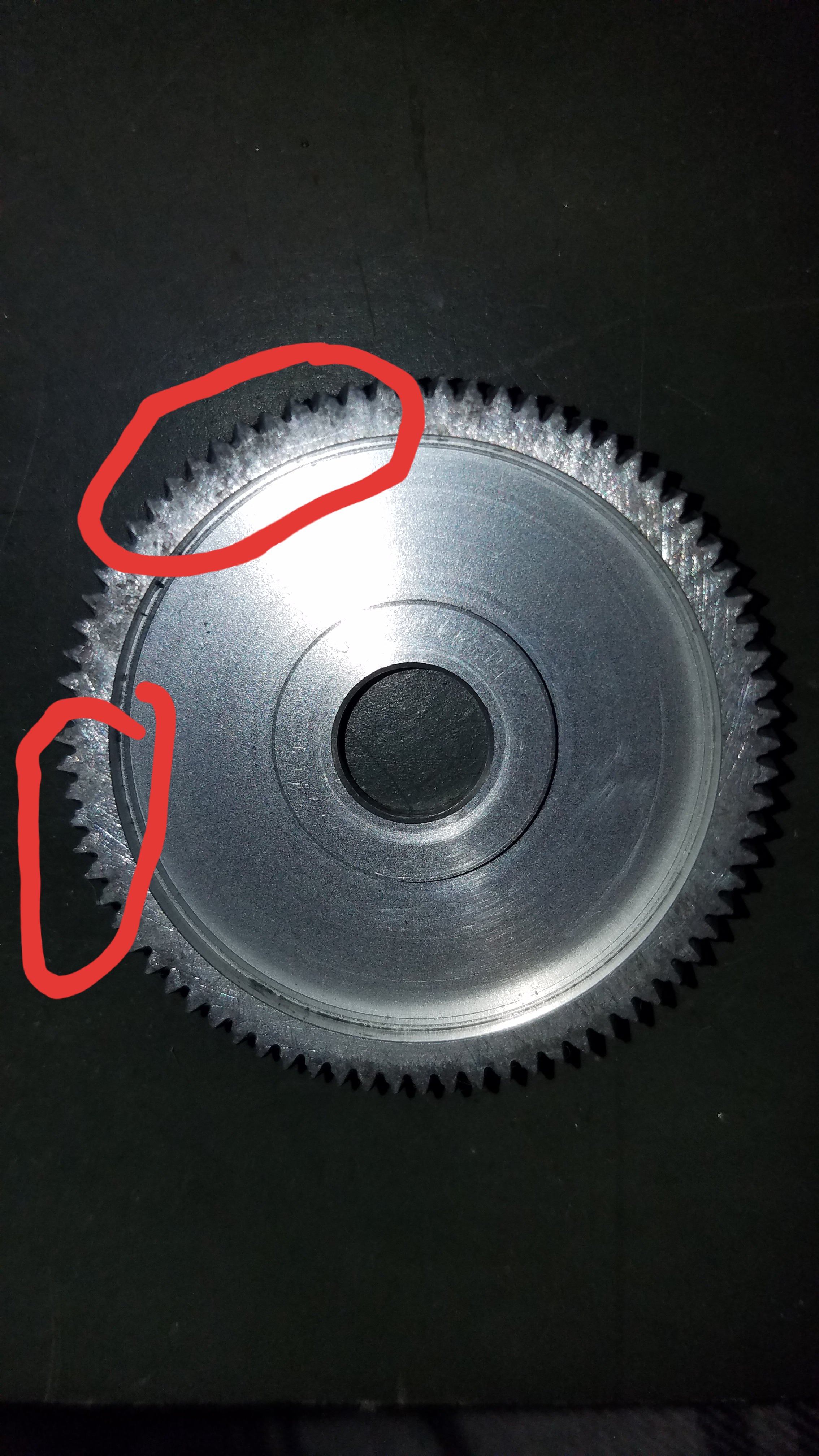 Clearly these two weren't the only ones with this issue, 2 years out the gear sets in both the high and slow speed variants are totally sold out with Quantum per their website. 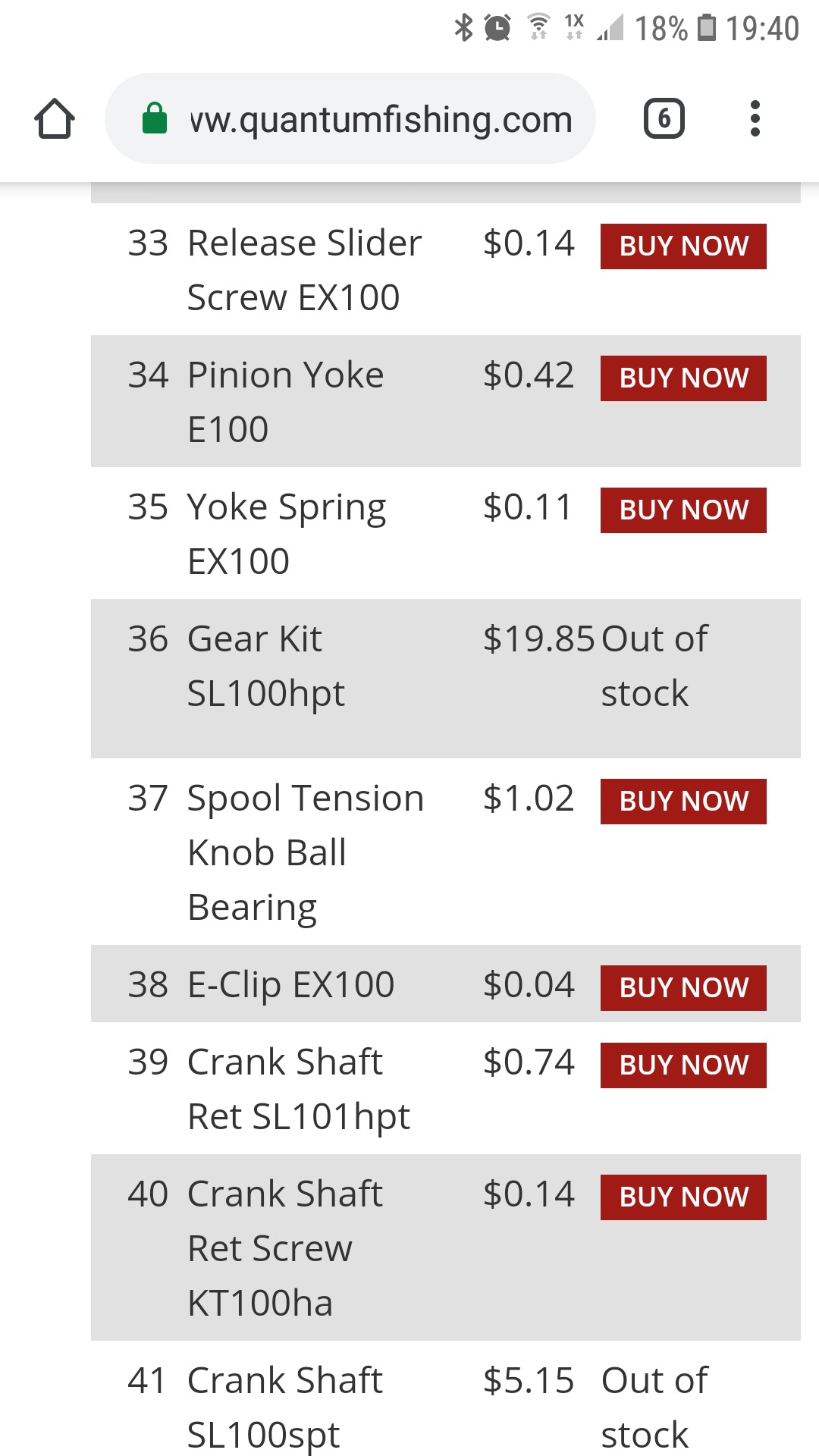 Oddly enough, even though the aluminum main drive gear is fouled up and damaged the aluminum (different alloy clearly from the color) main reel crankshaft is blemish free and looks as expected, apart from the ever present filth that somehow infiltrated this reel. 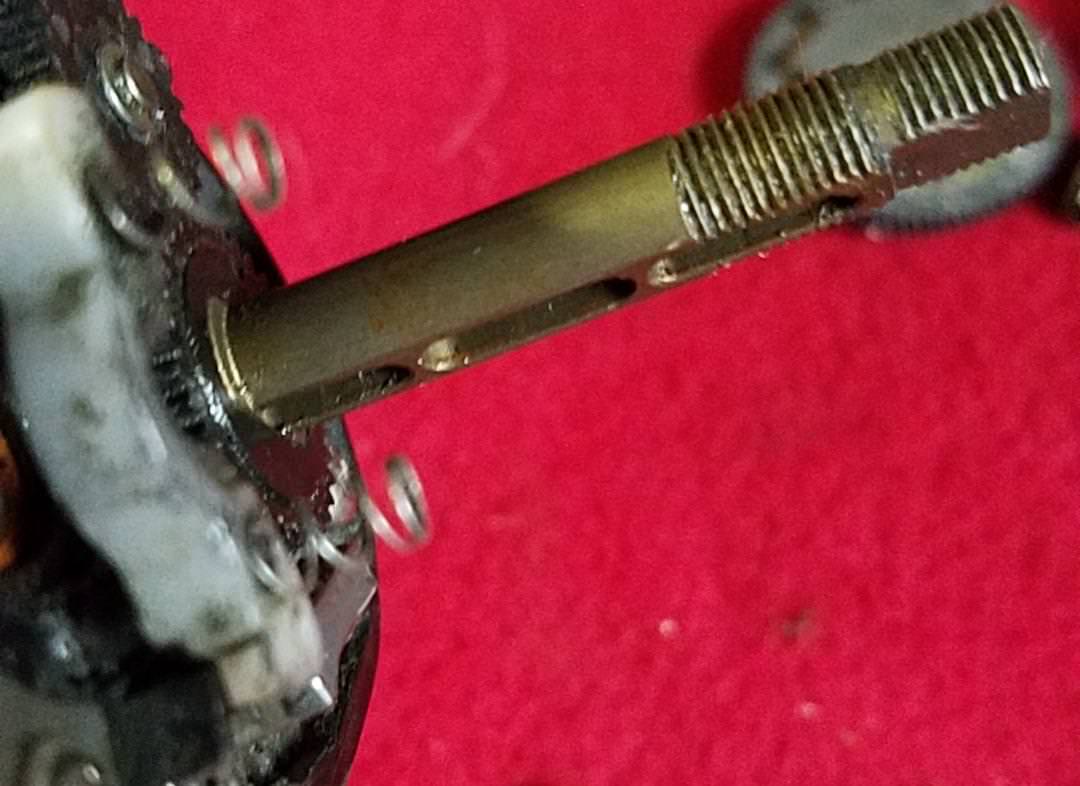 The same could not be said for the anti-reverse bearing. The inner ring had obvious exterior corrosion. 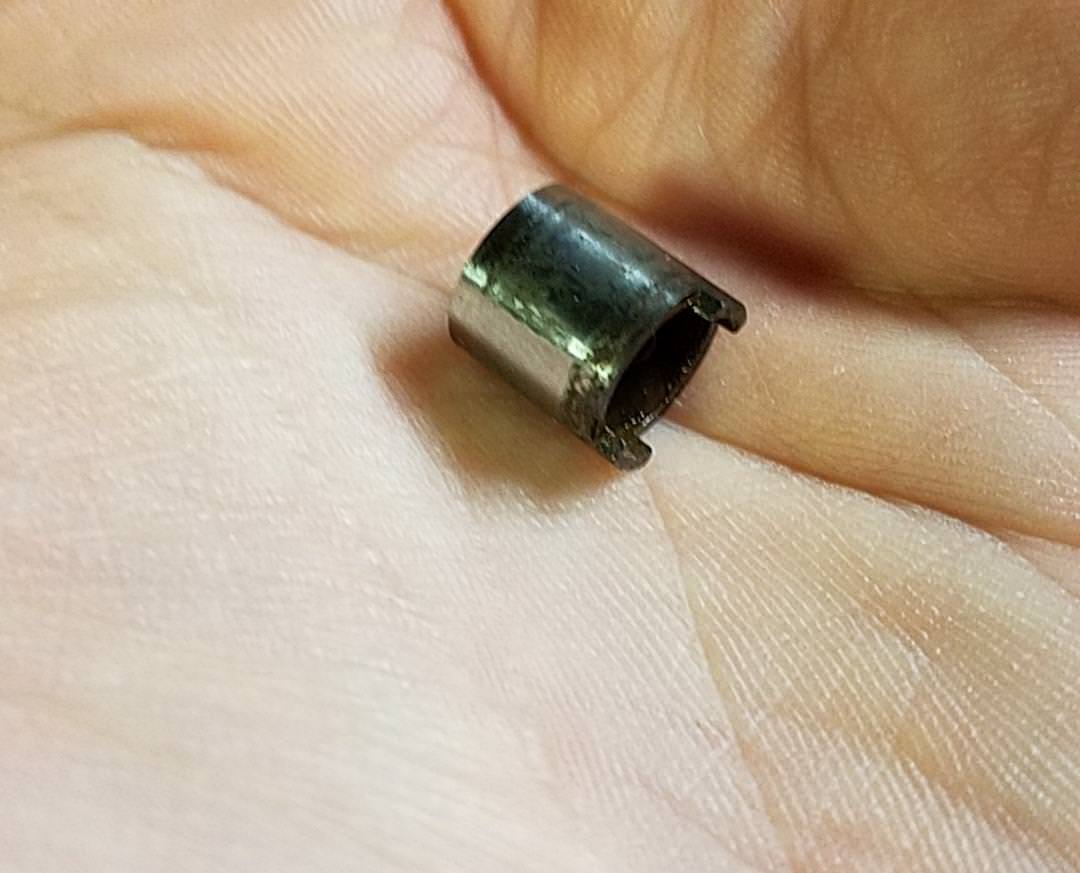 The retainer of the anti-reverse bearing has its own corrosion issues, with rust visible from the inside of the reel. Straight orange rust - clearly this part isn't stainless steel. 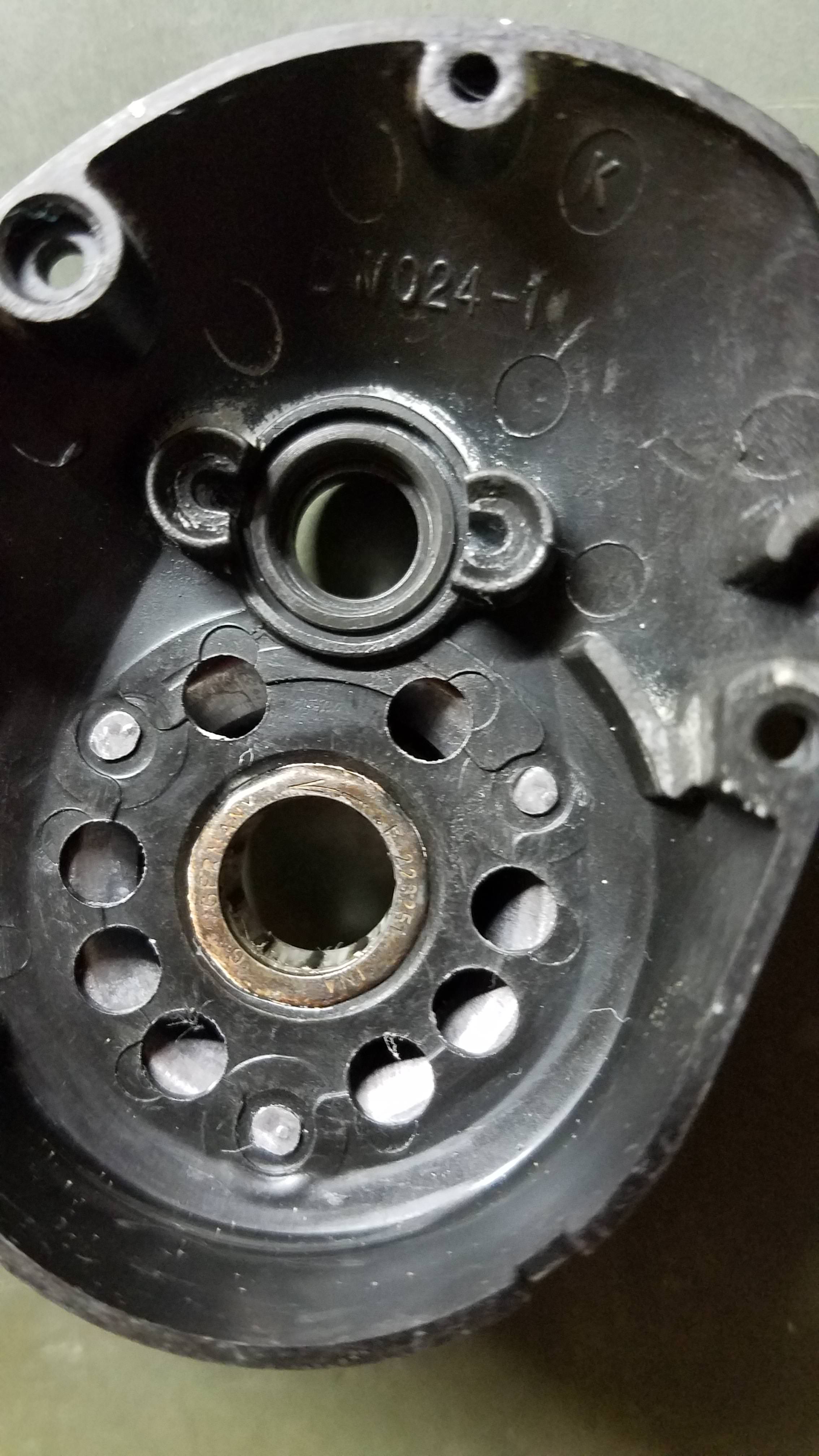 You'd think that corrosion and related issues would be enough but not for this thing. Check out the condition of the inside of the drag star...see how off center the casting for where this threads onto the crankshaft is? Terrible quality control. 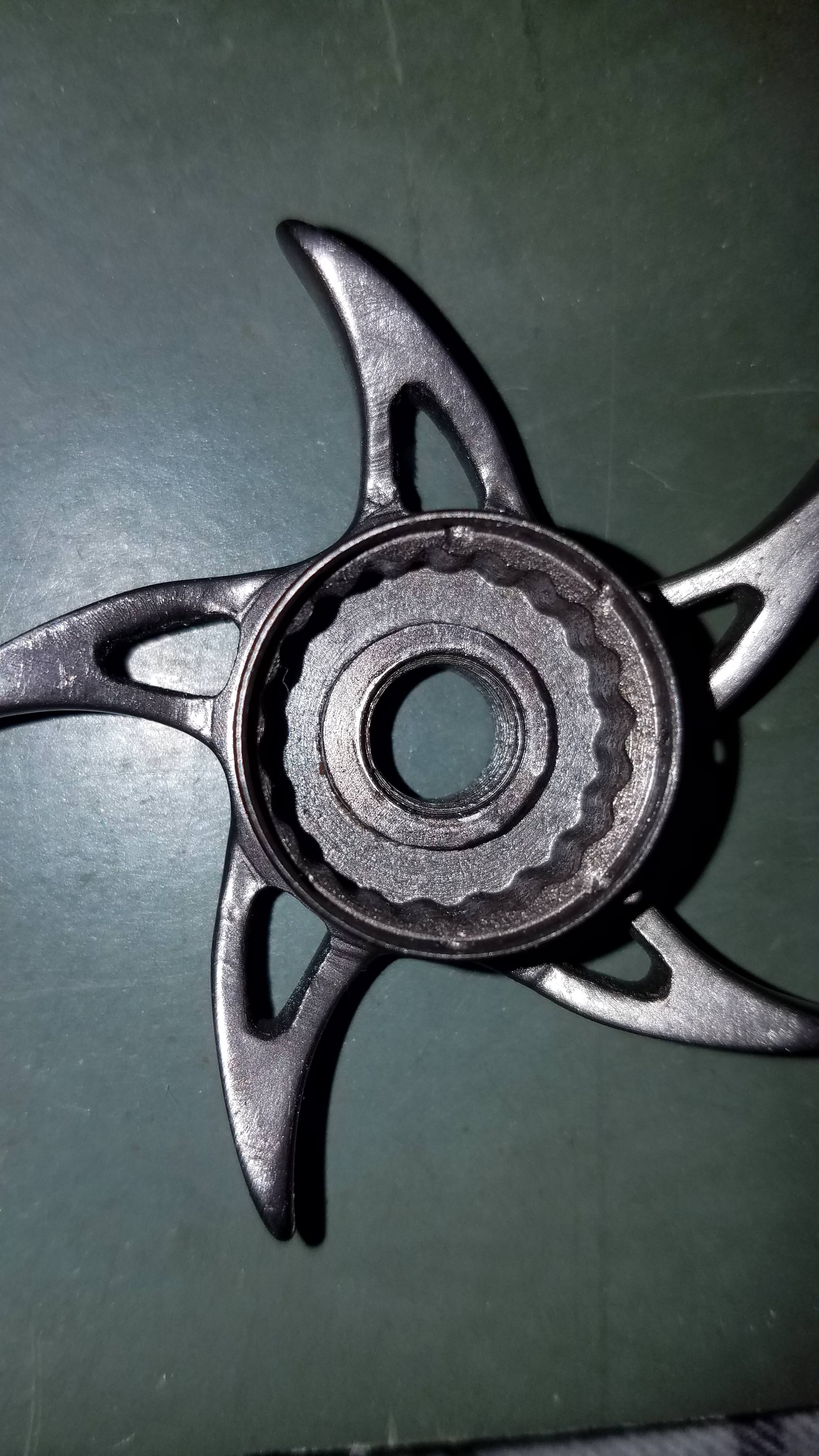 So, for $200 you get susceptibility to corrosion when used in a freshwater environment, inferior main gears that the company doesn't have any replacements of left in stock, and a lousy bond between the finish and the oxidizing aluminum underneath. All the while there are a total of three points where outside dirt and grime can enter the gear case (through the sides of the unprotected thumb-bar, down the opening for the pinion gear and through the idiotic hole at the center of the lubrication port cap.)


Long story short, save your money on these things until such time as they release an apology for peddling this garbage and acknowledge what a heap of profit-making trash this reel really was.
Last edited by onthewater102 on 13 Oct 2018, 09:21, edited 1 time in total.
I have a marriage license and a fishing license, but I only carry one in my wallet.

I have absolutely no problem reading a review of products that fail, especially from a true user. Too many pro staff leave glowing accounts of products that are slightly tainted. Thanks!
My Tinny is a tool, a means to an end, if you will. 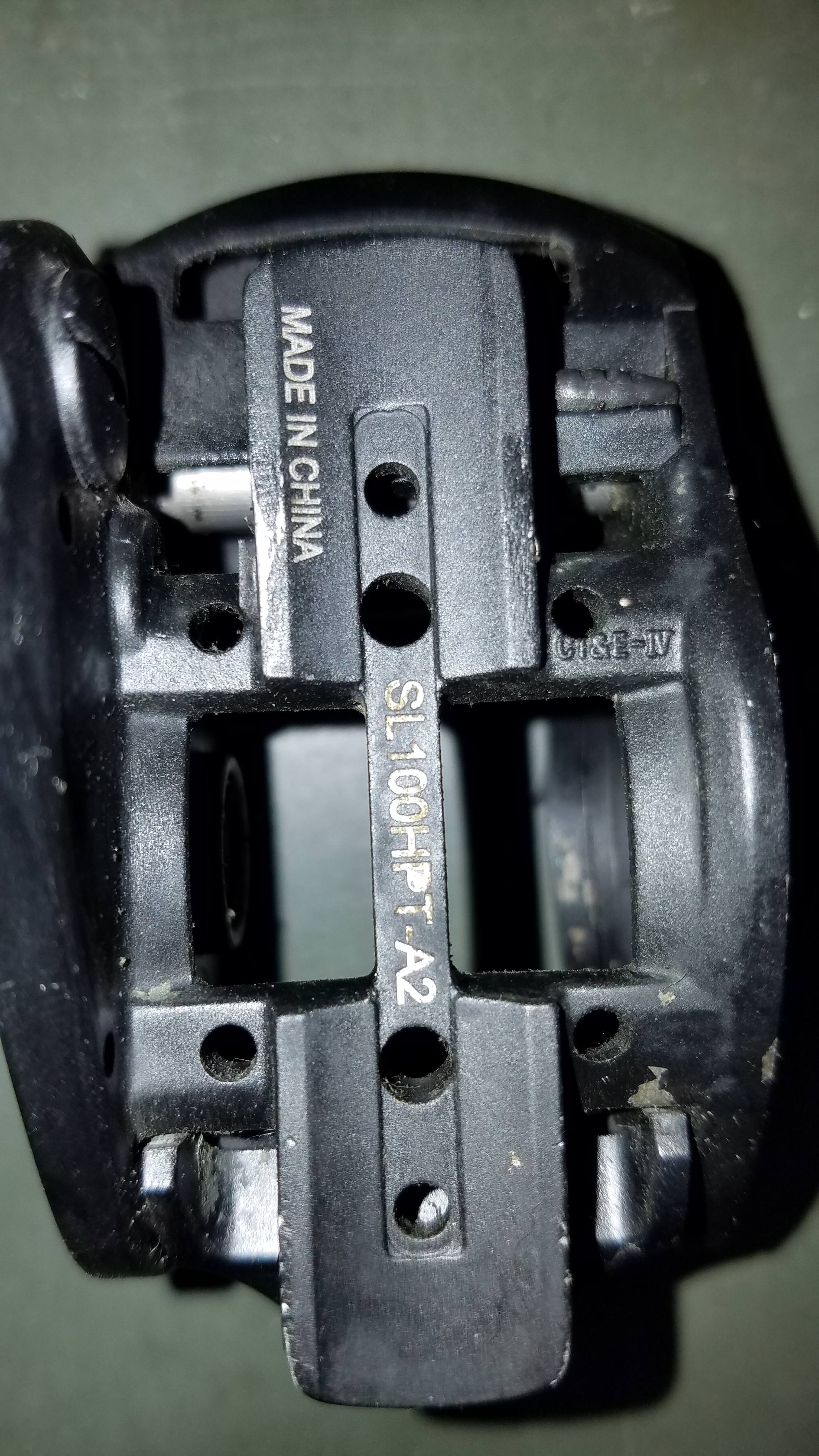 There are some quality reels coming out of China these days, but Quantums aren't among them. The more I think about all the areas this reel had quality issues the more evident that these issues are indicative of a management team dialing down the quality to up their profits at the customer's expense, much like the american car companies did to land themselves peddling for taxpayer handouts like a bunch of street bums. Quantum deserves the same outcome and no bailout for trying to pull this crap on consumers.
I have a marriage license and a fishing license, but I only carry one in my wallet.

Yes, but still waiting on a response.

Short of sending a pile of quality replacement parts I don't see them doing anything satisfactory to rectify the fraud that these reels are.
I have a marriage license and a fishing license, but I only carry one in my wallet.

Well, they're sending me a pair of SL100HPTA's as replacements for the SL100HPT's...I don't see a difference in the features listed between the reels I sent back and the reels they're sending, but I can't find MSRP on the HPTA's to compare it to the $200 original asking price on the HPT.

Found an interesting factoid...despite having a 7.3:1 gear ratio these only retrieve 28" per turn...hardly a burner and another example of why gear ratios aren't indicative of retrieval speed. I did a lengthy member review on the Piscifun Phantom (found on the tinboats.net home page), which has a 7.0:1 ratio and retrieves over 30" of line per turn - considerably faster than this 7.3:1...but I'm getting off point.

They've got an uphill battle ahead of them to impress me enough to ever buy from them again after the colossal disaster that the SL100HPT turned out to be. I'll take one of these HPTA's apart and see what's going on inside and report back any first impressions. Long term durability will be the main question though, and that's certainly not going to be addressed by my initial quality assessment given how many different facets of the old models showed egregious deficiencies in design over time.
I have a marriage license and a fishing license, but I only carry one in my wallet.

I remember seeing a Smoke review thread somewhere else and a line that stayed with me was:

"If you wanna see Smoke, just light a Benjamin on fire."
My Tinny is a tool, a means to an end, if you will.

I've only owned on Quantum in my life. I bought it as an emergency replacement the day before a tourney when one of my primary reels was damaged. Never did perform for me. It didn't show all that corrosion, but it needed torn down and lubed about once a month or the bearings would start singing. It was less than stellar and I couldn't even tell you for sure what tote it's in.
Top

Thanks for the review!

I have a smoke reel and have owned it for 5+ years and its perfect. Its the first combo i pick up when casting. Every spring i put a little gun oil in it and that's it. I had a code reel that went to hell in just 2 years.
Top

I don't know if the design would have changed between that one and these, but both reels were the same disaster.

Look at the design flaws alone - the openings in the thumb clutch bar, the hole in the oil fill plug and the piss poor casting quality of the drag star with how off center it is - no amount of miss-treatment or poor maintenance leads to any of these conditions.
I have a marriage license and a fishing license, but I only carry one in my wallet.

I found my own issues with Shimano reels. My $250 Stradic Ci4+ (used for a month) sits unused (unrepairable Shimano denied warranty) while my $30 Daiwa 3550 (both rear drag) gets 100% of my usage. If it breaks I deep six it and take another one out of the box. I keep a second rod in my truck and boat at all times, and don't fish tourneys so I'm OK. I'm on my second season with the Daiwa and no issues at all.

Oh, the one ball bearing 11 lb drag $30 Daiwa is every bit as smooth as the Stradic and takes on the 9-10 lb. snakeheads as easily without losing fish as the 9 ball bearing 12 lb drag the Stradic used to before it got retired.

These big name companies that went to cheap labor think their reputations are eternal, NOT!!!
Regards,

Shimano is supposed to be the cat's meow when it comes to reels, but I found the Symetre 4000RJ of mine to be sub par.

For $100 reel to have sand-cast pot-metal gears is somewhat expected, but to have low grade bearings in it that seized when exposed to salt water was something totally different. I didn't have an issue with customer service, but I ordered the necessary parts and fixed it myself. I haven't bought another Shimano since that reel, but people continue to rave about them.

I think you're right - they're still living on a name because the vast majority of people don't know any better. How many people on here have taken a reel apart? How many of the few that have would recognize the difference between a quality machined part and a cast part? I doubt perceptions will change much if at all. People don't recognize the similarities between all the brands they buy and hate, they'll never put two and two together and realize the brands are just labels stuck on mass manufactured goods in most cases.
I have a marriage license and a fishing license, but I only carry one in my wallet.

i've been using an abu ambassadeur 5000 reel for 25 years now.upgraded the bearings about 15 years ago.thats it.i can't begin to tell how many species and sizes of fish i've been through with this reel.it just refuses to die.all it takes is regular,proper maintenance.i just remembered,i even accidently caught a sturgeon with it.it destroyed my wifes favourite salmon rod.i put the brakes on it when it tried to go under a log boom and that's all she wrote.had to cut the braided line.i was fishing for chinooks so i had really heavy leader.
if all else fails....stop using all else
Top

I think those models are among the few they still make in Sweden, but even ABU has gone to SE Asia for manufacturing their low profile reels and selling them on the name they earned with their ambassadeur line
I have a marriage license and a fishing license, but I only carry one in my wallet.