Last summer we acquired a 1966 Mirrocraft 3614 14' Deep Fisherman "fishin' boat" with an Evinrude 8 HP motor, trolling motor, fish finder and trailer for a reasonable price. I had to spend about $200 to get the motor gone over completely, the motor only had about 20 hours on it, but it wasn't pumping water, so I got it tuned up and parts replaced as needed.

All in all it, had certainly seen some use and had been left tied up to a dock during a storm, so suffered a bit of paint scraping and a dent or two during the storm.

But it doesn't leak, it gets from here to there on the lakes, and I wanted to make it better and more comfortable.

This is what I am starting with:

This is the layout I'd like to end up with (the current Mirrocraft 1415 Outfitter) :

I have removed all the seats, the old broken transom; and I have pressure washed the interior hull:

I've flipped the boat and mounted it on sawhorses and tied it down to strip off the old brushed on paint:

I have acquired a treated lumber which is approved for contact with aluminum (no copper in the treatment) 2X12 which I have cut to the old transom shape and it is awaiting stain and varnish.

The thru bolts will be replaced with stainless steel. The old aluminum bench seats will be salvaged for a rear shelf inside the hull at the transom, and a couple of hatch covers (maybe).

I also purchased a 30X12X11 inch aluminum tool box from Northern tool which I will modify to be a wet well in the blue area of the floor plan above:

2 batteries will be placed starboard opposite the wet well to equalize the weight of the full wet well.

So far, calculations for weight will work out to be below the max with two heavy folks aboard, full wet well, 6 gallons of fuel, batteries, etc. Even with a motorized anchor mate she'll still be below the max weight by quite a bit. Flotation will be added under the decks,and I'll be using plywood for decking.

Barring rain tomorrow, I will begin stripping off the old paint.

I also will be rewiring the tilt trailer, and repainting it; in addition to replacing the bunks and probably the rear roller (which is bent but still rolls... Well, it does after I whacked it with a hammer a few dozen times!).

Wish me luck... I'm a woodworker, but this is one ambitious project!

Looks like you have a good plan - keep us updated
Work: A dangerous disorder affecting high public functionaries who want to go fishing

So, stripping is a chore...

Gone is the dream of a bare aluminum hull under the chine. Too much beach/dock/trailering rash. That's okay, I'll paint the bottom, too. Boy, that 50 year old turquoise paint is as tough as the newer stuff on top of it!

Here's the day's work before the rain set in:

Thinking about this, and it's really good news.... I don't have to be as picky about stripping. The previous layers of paint that stick will make good base, just scratch it with Scotch Brite and paint.

I've stripped all I'm going to from the boat. and sanded the rest. Half of the boat is primed with an aluminum primer.

I repainted the trailer, remade the bunks, rewired the trailer and it's ready to go except for the bunk carpeting.

Rewiring the trailer was a pain. It's a tilt trailer, and the ground was weak to the back. I tried everything short of running a ground to each light.

I came up with a "5 buck solution;" a battery cable from the front of the trailer to the tilting portion (at the hinge), and lots of dielectric grease.

Pix next post, I'm resizing them to minimize bandwidth.
Top

You can see the before pic of the trailer with the old rotten bunks removed (and the new bunk wood laying in wait) and the mostly stripped and sanded boat.

Here's the trailer with new bunks from the side.

Here's the "5 dollar fix" to the trailer.

Here's trailer from rear with half primed boat in the background. I added non slip stair tread tape to the trailer walk (we'll see if it stays stuck on after some use!).

For those of you calculating, it takes exactly 3 rattle cans of Rustoleum self etching primer to cover one side of this 14 foot boat. ONE coat.

Wet sanding will make it take at least another coat,

The other half has been primed, first coat. 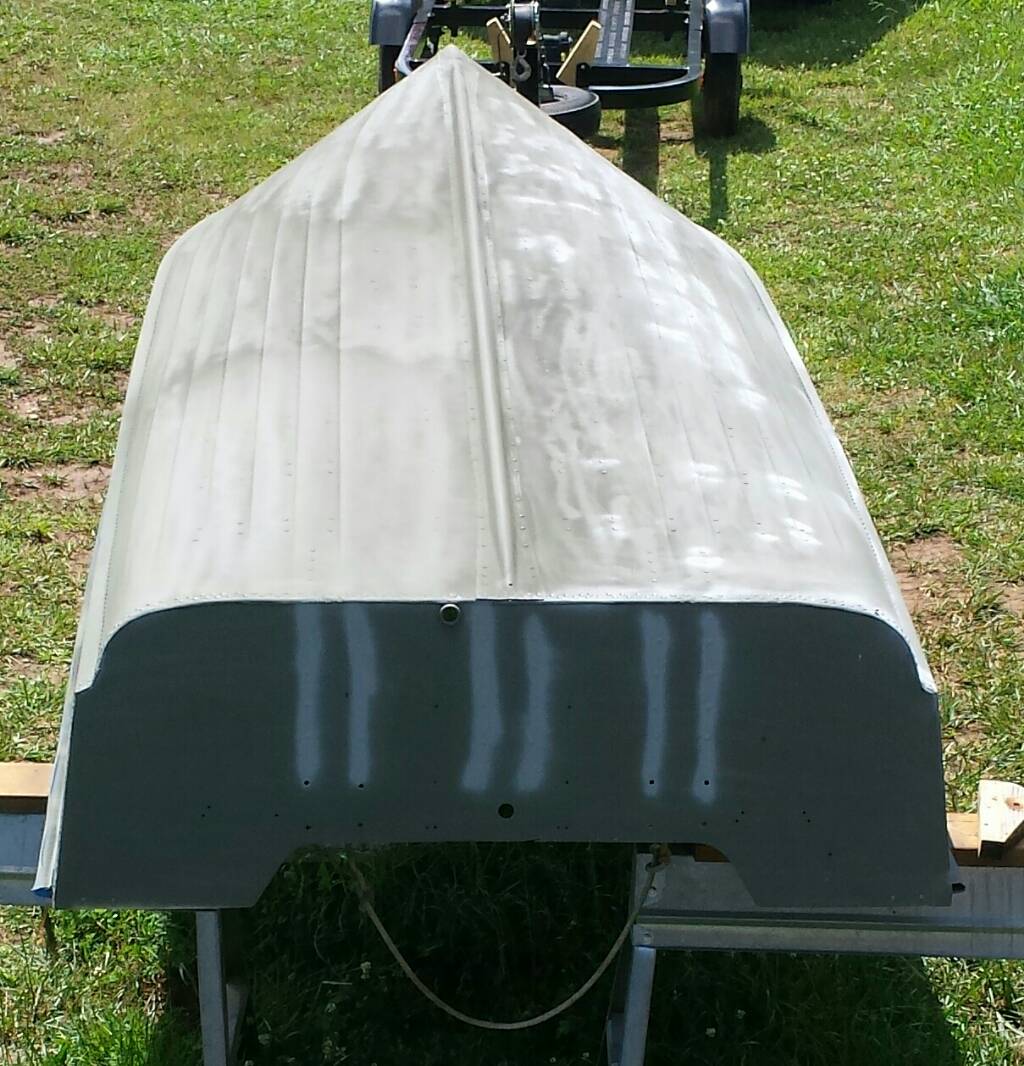 All primed and wet sanded to 600 grit, with a scotchbrite ultra fine scrub down with simple green and a rinse, too.
Ready for paint.

The lighter color gray is a filling primer. It didn't take out all the 50 years of "rash," dents, and scratches. But the painted boat will shrink from a hundred foot boat to a pretty nice one at 20 feet.
Top

Comparing the old boat to the new:

My original calculations show the max load would not be exceeded even with all my changes and my wife and I on board, with the usual gear.

My question is, since the new boat will have more flotation, since I will be adding more flotation than the original (all the bench seats were filled with foam), can the empty weight be more and still allow more payload?

Could I take a third person, or add a third seat instead of just the pedestal socket, reasonably? Empty weight will not increase to even the smallest amount of 400#.

Is it reasonable to expect the empty weight not matter too much, and still have the payload capacity?
Top

1st and second coats of black up to the chine, with a few dribbles. 600 grit and ultra fine scotchbrite wet sand between coats then a wipe down with mineral spirits. 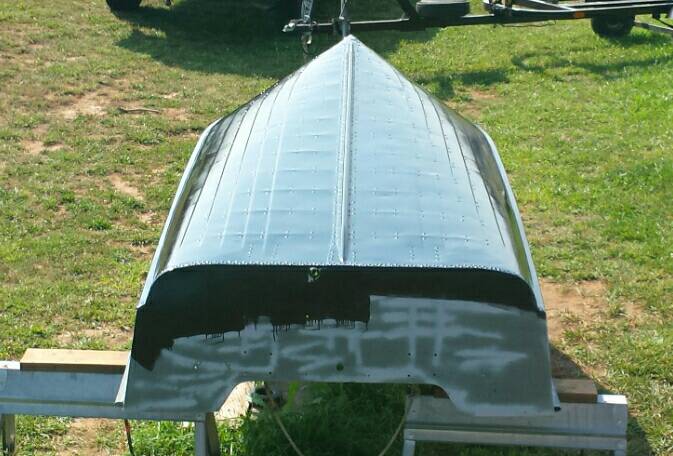 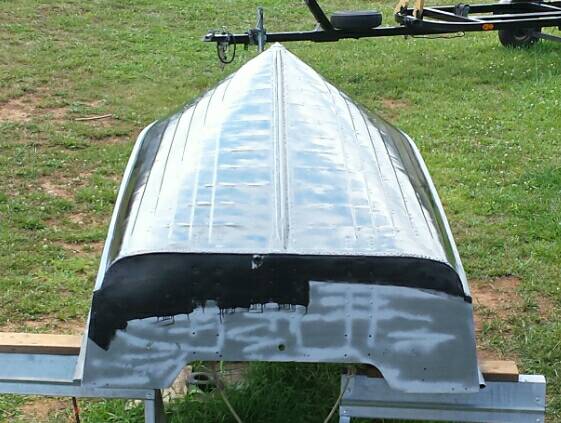 It's gonna take 4 to 5 coats to finish the black then smoke gray to the gunwales.
Top

Second coat is wet sanded with 600 grit, and scotchbrite all over.

Since some of the rivets get sanded down to primer, I'm going to brush paint them (undiluted) and around all of them, the keel, and chine (where the seams are). And then, just scotchbrite those areas before putting on the 3rd coat. Then, I'll scotchbrite everything and the last coat of paint. Then hand sand to 1200 grit, and buff it out.

I've been diluting my paint about 1/3 with mineral spirits to this point... but will decrease dilution to about 1/10th on the last two coats.

Then I will mask from the chine seam down, and paint to the gunwales with smoke gray.

Here's the thicker paint on the rivets and seams. 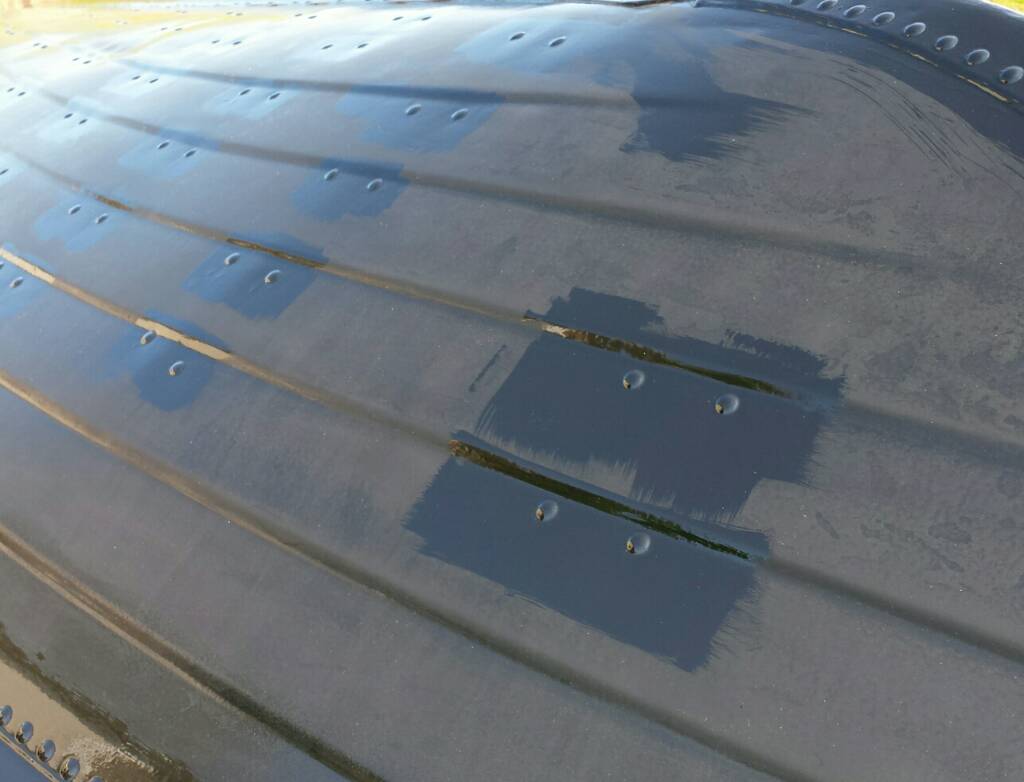 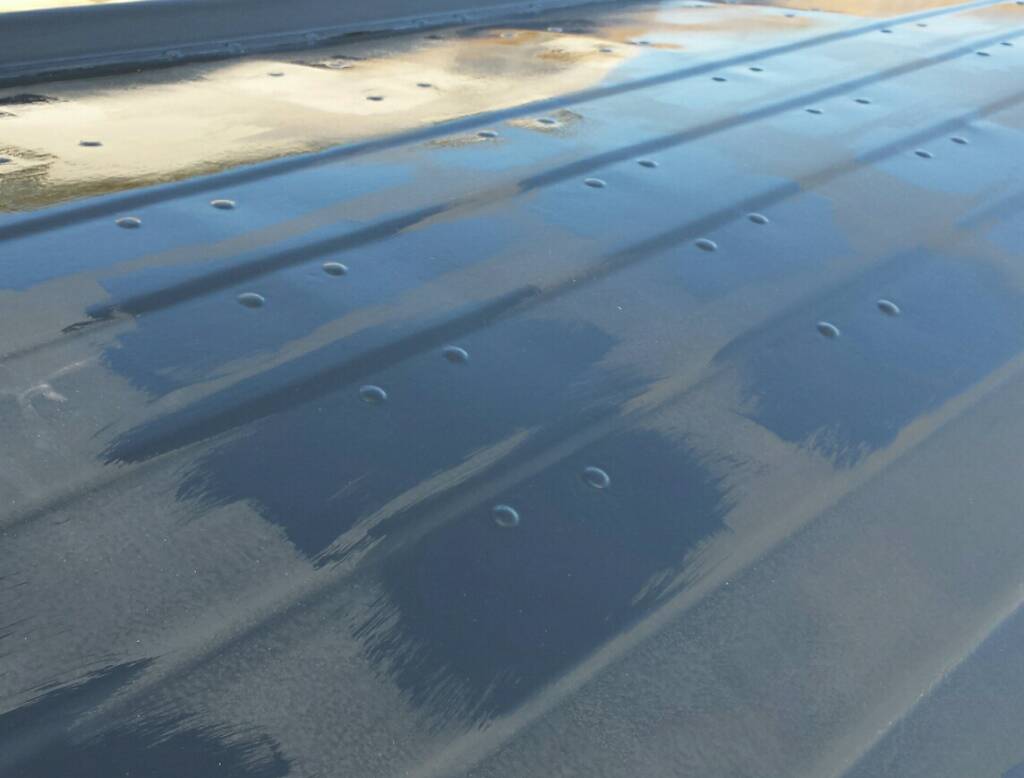 My wife says I'm trying to build a yacht. I just want something nice to be proud of.

It didn't leak before, I don't want it to start leaking once done.

Truth is, I'm getting impatient.

Looking forward to putting it on the trailer, and working on the interior.

I still have the sides and transom to paint grey.
Top

A good friend makes vinyl lettering for most of the cop shops and many businesses here in east TN.

I asked him if he could cut the boat's name for me.

This is what he did (well, it'll look like this on the starboard side of the transom once painted and ready).

Return to “Jon and V boat Conversions and Modifications”